Since I always keep mixing up the names of morphisms, I finally created a cheat-sheet that now in its full glory decorates my office. The important part of the poster is, that it puts morphisms that deconstruct data (left column) with those that construct codata (right column) in contrast. So on one glance you can see that zygomorphisms are obviously dual to g-apomorphisms — of course, that’s an easy one. 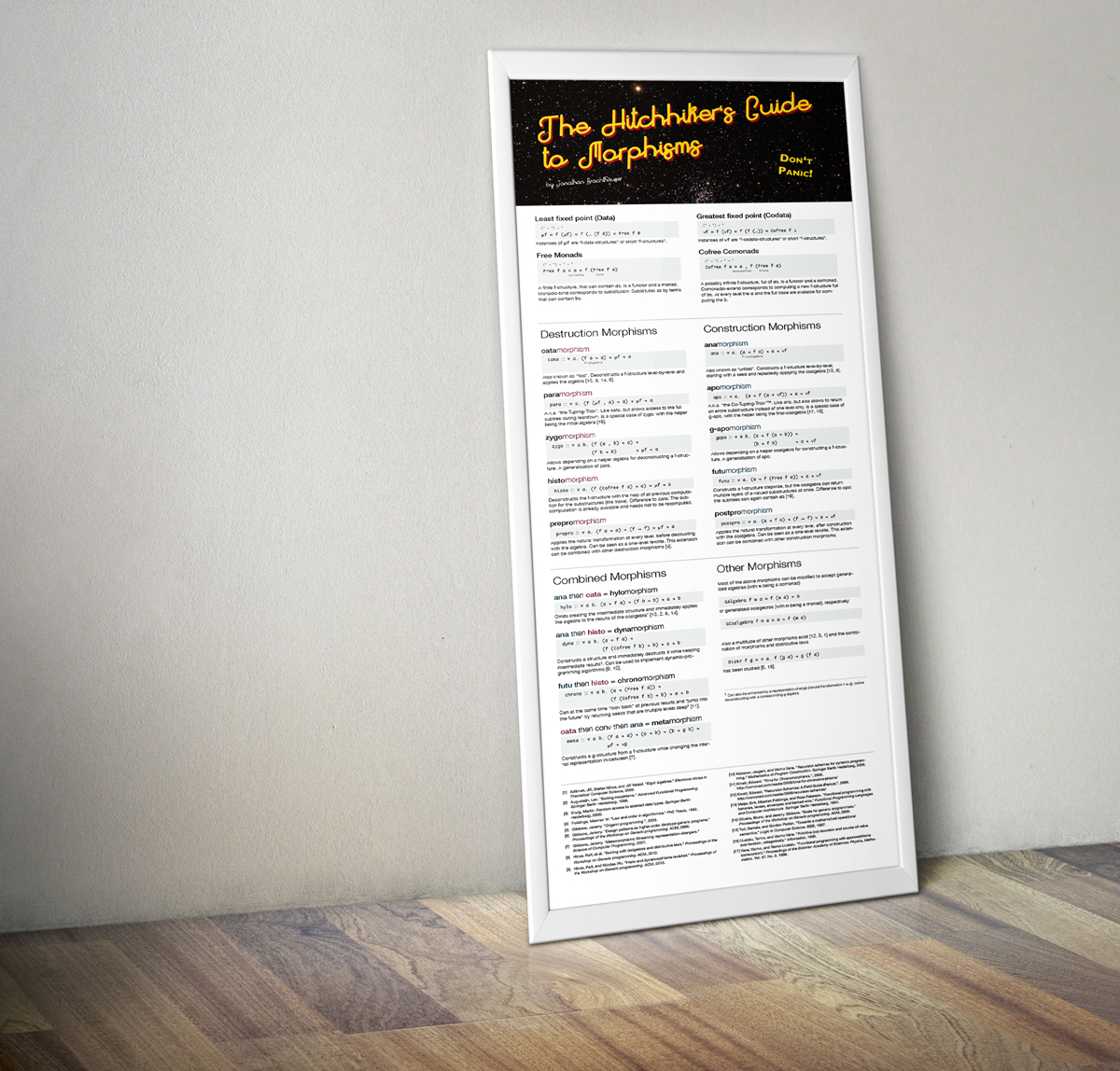 The remainder of this post is just repeating the contents of the poster for easy web-reference. I am happy for every comment that links to either easy accessible material on the topic, or good examples of how to use the various morphisms.

A.k.a. “the Tupling-Trick”. Like cata, but allows access to the full subtree during teardown. Is a special case of zygo, with the helper being the initial-algebra [16].

Allows depending on a helper algebra for deconstructing a f-structure. A generalisation of para.

Deconstructs the f-structure with the help of all previous computation for the substructures (the trace). Difference to para: The subcomputation is already available and needs not to be recomputed.

Applies the natural transformation at every level, before destructing with the algebra. Can be seen as a one-level rewrite. This extension can be combined with other destruction morphisms [4].

A possibly infinite f-structure, full of as. Is a functor and a comonad. Comonadic-extend corresponds to computing a new f-structure full of bs. At every level the a and the full trace are available for computing the b.

Also known as “unfold”. Constructs a f-structure level-by-level, starting with a seed and repeatedly applying the coalgebra [13, 5].

A.k.a. “the Co-Tupling-Trick”™. Like ana, but also allows to return an entire substructure instead of one level only. Is a special case of g-apo, with the helper being the final-coalgebra [17, 16].

Allows depending on a helper coalgebra for constructing a f-structure. A generalisation of apo.

Constructs a f-structure stepwise, but the coalgebra can return multiple layers of a-valued substructures at once. Difference to apo: the subtrees can again contain as [16].

Applies the natural transformation at every level, after construction with the coalgebra. Can be seen as a one-level rewrite. This extension can be combined with other construction morphisms.

Omits creating the intermediate structure and immediately applies the algebra to the results of the coalgebra† [13, 2, 5, 14].

Constructs a structure and immediately destructs it while keeping intermediate results†. Can be used to implement dynamic-programming algorithms [9, 10].

Can at the same time “look back” at previous results and “jump into the future” by returning seeds that are multiple levels deep† [11].

cata then conv then ana = metamorphism

Constructs a g-structure from a f-structure while changing the internal representation in-between [7].

or generalised coalgebras (with m being a monad), respectively:

Also a multitude of other morphisms exist [12, 3, 1] and the combination of morphisms and distributive laws

† Can also be enhanced by a representation change (natural transformation f ⇝ g), before deconstructing with a corresponding g-algebra